Sunday morning I got up late, headed out late, but had lots of little plastic packets of squishy sugar and some tunes playing from my bento box and felt ready to go!  I headed up the MV trail, turned around at the detour mess, and immediately - THWACK! - felt something hit my helmet.  What's that!?  Angry noise from the creature trapped!  I immediately freaked, skidded to a stop, and started ripping everything off my head - my sunglasses exploded (dratted removable lenses), my helmet went flying, hairties fell out, and a little bumblebee buzzed angrily on his way.  Thanks to the runner who stopped to watch the show and laugh so hard you were snorting - glad I could make your morning.


I continued south, and a few miles later got hit pretty hard by a large fuzzy bee in the clavicle.  About 10 seconds later, another one to the tricep - what is going ON with the bees today?!  After another mile or so, I took yet another one to the face - cheekbones of steel, baby!  I stopped at the water fountain (mile 15ish) to refill and refuel.  While I was sitting there, a Little Person (LP) jogged by.  Awesome.  The bottom 5 miles of the MV trail are decently hilly, but went much smoother than last weekend - or maybe I've put the Conte's hill workout fear into my quads.  Either way, I turned around to cruise back up the MV, and....wipeout.  I took a hard right turn into a sneaky little pile of gravel and went right over.  My right hip is sore and I've got a sweet scrape, and my front brakes are making a neato noise, but otherwise no real injuries.  I was dumb enough to dump my water bottle over the scrape to clean out the gravel - forgetting that there was nuun inside.  Salt + open wound = curse words I didn't even know I knew.  I stopped at the water fountain (mile 25ish) to refill my water bottles & fuel, and bumped into two cyclists who noticed my wicked road rash, and immediately started showing me all their wipeout scars.  Cyclists are weird. 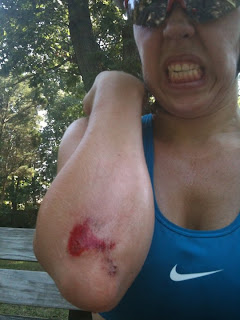 The boys called this AWESOME.
The poet met up with me at the 4 mile run/MV intersection (mile 35ish).  While I was waiting, a guy jogged by, stopped, sat down, and lit a cigarette.  Gross!  The air quality was awful - he probably could've just breathed a little more deeply and gotten the same effects.  Our plan was to do a DC loop to hit the 50-mile mark, but by then it was 11:30 and just too.effing.hot.  My bike computer said it was 105*, and despite all the fuel, I was starting to feel pretty zonked by the sun, so we headed home.  A mile from home?  Bee directly to the eyeball - I have no idea how it got around my sunglasses, but it must've been pretty determined.  The universe was flipping me off...and I gave a big double-middle-one right back.


When I got home, I decided I'd wait until dusk head back out to finish up 50 - ha!  Show of hands for people who thought THAT was going to happen?  Instead, I stuffed myself full of salt and carbs, took an amazing shower, and snuggled in for a nice nap.


This morning I woke up to temperatures a solid 20* cooler than yesterday morning, and headed up to DC for another ride with Heather.  She was rocking her clipless pedals (side note: why are they called clipLESS?  shouldn't they be clipFUL?) for her first real ride, and she kicked butt!  We did some laps of Haines Point - it was great to be on smooth road instead of bumpy trail, although my legs were definitely a bit grumpy after the rollers yesterday.  Mr. Jefferson was happy about the gorgeous weather... 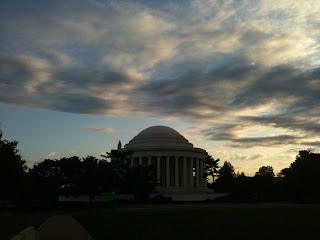 I love riding in DC in the morning - the first few miles on the MV are always tough, but it's totally worth it to ride over that bridge and see the sun on the water.


In store for the week: I fulfill my obvious death wish by becoming permanently attached to my bike & another giveaway!