- March 14, 2011
I'm been having my usual piriformis problems the past few weeks.


My step back week seemed to make it flare up.  Cycling makes it feel much better, and I don't notice it while running, only after.  About a week ago it started to intensify a bit.  I've been really good about icing, stretching, and foam rolling, but to no end.  Since I've graduated from PT, I figured I just needed someone to dig their elbow around in it for a while, so I scheduled a sports massage appointment for Friday based on the recommendations of my training partners.  It (my piriformis) was the usual amount of cranky after Tuesday evening's track workout, and while it felt amazing during my Thursday evening tempo, it had tightened up again by the time I drove home.  So I felt like the timing for this appointment was perfect.


It was very unlike other sports massages I've had.  We talked and then she spent some time evaluating what was going on in my body.  All my piriformis problems are on the right side, and it blew my mind when she told me that my hamstring and glute were tight on the left side, which was making my right side overcompensate.  I also had several core/hip muscles/stabilizers that were short (I assumed this meant "tight") and my sacrum was tilted/moved somehow which was making everything a mess.  It's likely that I'm not reporting all of this correctly, because it got kind of hard to keep track after a while.  When she started working on me, it also wasn't the sports massage I was accustomed to - less like a beating and more like releasing points and making adjustments.  But when I stood up, even though I still felt pain, things felt looser than they had in a while.  She told me it might take 2 or 3 sessions to get things really straightened out, but it seemed like an end was in sight.


I was actually pretty pleased when I got home.  Since my PT discharged me, I've been feeling kind of hopeless about every getting over my piriformis issues.  Rest seems to make it worse, not better.  Which has led to a lot of anger and frustration on my end.  But this made me hopeful.  A few more appointments, some stretching and strengthening, and maybe I could both run AND live my life pain-free!


I asked her about running the next day, and she gave me the go-ahead as long as I felt okay.  So I stayed with the plan to run 14 - the last long run of this training cycle.  I was spending the weekend with Lauren, who was in town, and we headed over to meet up with CAR for the Saturday morning long run. 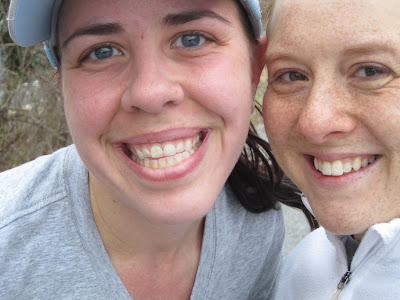 We started easy, just running and chatting.  We did 4 out-and-back, and then I dropped her at the car (to change and drop some things off - she was only doing 10) and headed up the trail.  I felt a little stiff in the first mile but everything seemed to shake out pretty quickly.  I picked up the pace in the middle third and then stopped briefly to Gu in Bethesda.  I did the last 5 miles as race pace miles and finished up back at Fletcher's, thrilled to pieces about how well it went.  I felt amazing!  My knees and lower back felt a tiny bit sore from running for 2+ hours, but that's to be expected.  Everything else just felt a bit stiff and tired - like I'd just run 14 miles. 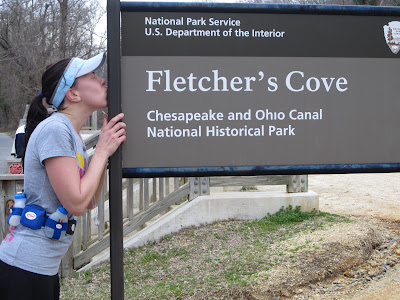 I stretched a bit before we got in the car.  We stopped to get coffee on the way back, and when I got out of the car, I couldn't believe how much I had tightened up in the 10-15 minutes we'd been driving.  I stood in the corner and stretched while LPT got her coffee.  But one more in and out of the car wasn't happening.  By the time we got back, I couldn't stand up.  I had a hot rod of pain from the top of my hamstring all the way through my butt and up my back.
I was pretty concerned at this point, so I took some time to foam roll everything, stretch carefully, took some ibuprofen and then got in an ice bath.  And almost ripped the shelf off the wall trying to get back out.  By the time I was changed and had eaten, I was very worried, upset and in a lot of pain.
Amy was kind enough to offer up the tall girl's PT skills, and after we talked through it on the phone, I think she determined that my SI joint was the culprit.  I did some Dr. Internet-ing based on where I've been feeling pain and it appears that the internet concurs.  I can't sit or walk without pain.  Bending, putting weight on either leg and standing up all send hot fire stabbing up and down the right side of my body.  I've been icing and doing some very gentle stretches and taking ibuprofen on a stopwatch, but as of right now, nothing has helped or improved.
And I'm back on the emotional roller coaster that comes along with an injury.  My heart is broken.  I can't stop crying, and I'm so angry.  I've been so careful this training cycle.  And I'm really trying not to devote too much time and energy to anything except thinking about how to get through this day, and then the next and the next.  I've got an appointment tomorrow to see if I can get any relief and get things going again.  I can deal with 2 easy weeks of tapering and show up even more well-rested than I expected, but I cannot NOT show up.  Because this can't be a DNS kind of injury.  It just can't.  Even if I have to drag myself through 13.1 miles using only my front teeth, even if it wrecks the rest of my year of racing, even if I have to have my right leg amputated at the sacrum, so help me, I will not DNS this half marathon.  Not this time.