- February 25, 2011
This post is mostly for Lauren, who is running the Hyannis Marathon on Sunday.  She is primed and ready to smash it.  A week or so ago, she put out a request for mantras and music suggestions.  Babes, here you go!


Coming back to running hasn't been easy.  And the mental battle is somehow much tougher while running than while cycling or swimming.  I have a few mantras, things I repeat to myself when I'm trying to get through the 8th 800 or talking myself through finishing a tempo run.  Quite a few other bloggers play on a quote - "There will come a day when you can no longer do this.  Today is not that day."  I love that, but the way it plays out in my head is a bit different.  There have been a lot of days where I wasn't able to run, where I was sad and unhappy and jealous of everyone who could.  Not today.  And that's what I think, what I let beat along with my feet, what I was thinking last night while trying to finish out a tough 4M tempo.  Not today.  Not today.  Today I am able to do this, today I WILL do this.  There have been times when I wasn't able to do this, when I would have given anything to be able to do this.  So am I going to give up?  Not today.


The other mantra I read on a blog somewhere a few years ago, and I wish I could remember where and give credit.  I wrote it on my hands last year before my first triathlon.  Faith, not fear.  It gives me a lot of strength when I need it.  I thought it over and over last week at the 5K.  It's what I say in my head: have faith in your training, girl.  Don't be afraid to give it everything you've got.  Faith, not fear. 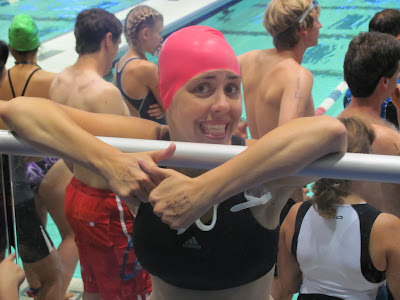 I also have tremendous music-related OCD, and when I find a song that I can run to, I tend to listen to it on repeat 42397 times during a run.  Sometimes it's just because it's good trashy beats, but sometimes it's because a lyric becomes a mantra, even in the worst pop songs.  Here are a few songs I've been shuffling through lately.  Feel free to judge my incredibly bad taste in running music and/or steal all these songs.
More by Usher (Red One Jimmy Joker Remix)
I love this song for running, but the lyrics that get me are when he says: "I'm a beast/I'm an animal/I'm that monster in the mirror."  It reminds me that I've changed a lot in the past year or so, the person in the mirror isn't who I used to be.  I'm a beast.
Born this Way by Lady Gaga (Liam Keegan Club Remix)
I just started listening to this song, but it was stuck in my head for most of tempo last night.  She says, "I'm on the right track, baby/I was born this way," quite a few times, which I love, but later in the song she says, "I'm on the right track, baby/I was born to survive."  It reminds me that I fought so hard to be running again.  I'm a survivor.
Raise Your Glass by P!nk
This is a kickass running song, and I really love the lyrics, "We will never be/never be/anything but loud," because that's true, but the part that pumps me up is where she says, "It's so fuckin' on right now."  That's what I think at the beginning of a race.  It's so fuckin' on right now.
We R Who We R by Ke$ha
I found this song because someone else mentioned it on their blog, and it's awesome.  The motivating lyrics for me are, "Tonight we're going hard/just like the world is ours/we're tearing it apart/you know we're superstars/we are who we are."  When I hear, "we're tearing it apart," I make my angry growly face and can push a little harder.
Club Can't Handle Me by Flo Rida featuring David Guetta
Confession time: I listened to this song through the entire 5K last Sunday.  "You know I know how/to make 'em stop and stare as I zone out."  Make 'em stop and stare, girl.
Welcome to the Show by Britt Nicole
I have no idea how this song found its way into my library, but it's pretty great.  The lyrics that kick my ass are, "Oh, oh, we're on a mission nothing can stand in our way/Oh, oh, we don't need permission/We're gonna rise up and we'll be the change."  That's an easy one: nothing can stand in my way.
Bleed It Out by Linkin Park
This one is interesting.  It's good in a short race that hurts.  "Fuck, this hurts, I won't lie/it doesn't matter how hard I try."  I've listened to it in lots of 5Ks.  It hurts.  I won't stop.
Till I Collapse by Eminem
I got this one when another blogger sent me a YouTube video of IM finishes with this playing.  I listened to it at the end of the 10K last December when I was grunting like an elephant.  "Till the roof comes off, till the lights go out/Till my legs give out, can't shift them up/Till the smoke clears out and my high burns out/I'm gone whip this shit till my bones collapse."  It always makes me think of that video, and if all those people didn't give up, neither will I.  Till my legs give out.
Survivor by Destiny's Child
This is the first song I ever remember listening to while running.  When I ran in college, I would listen to it on repeat.  Every time I come back to running after an injury, it makes me emotional to hear it come up on shuffle.  "I'm a survivor/I'm not gone give up/I'm not gone stop/I'm gone work harder/I'm a survivor/I'm gonna make it/I will survive/Keep on surviving."  I'm a survivor.
LPT, we're all pulling for you.  YOU GOT THIS.  Everyone else, leave some mantras or tunes here (hey, I'm going to need them in a few weeks too) and I'll send them on over!