A few weeks ago, Kate twittered to see if anyone would like to run the ZOOMA Annapolis Half with her.  I took a look at my calendar, but after seeing that I had 100 miles on tap the day before, managed to sweet talk her into just doing the 10K with me instead.  So we signed up.


I remember some friends running this race last year, and looked up some race reports to find that generally it is disgustingly hot and humid.  And after Tuesday morning's mini track workout, where it was over 84º by 6am, even a 10K started to feel like it was going to be a long way.  Thankfully, the temperature dropped as the week went on.  Saturday was gorgeous but my legs were zapped after a long week of training.  I was pretty thrilled to get into the pool for a very short and easy swim and then proceed directly to brunch instead of waking up before dawn to ride in circles for 6 hours.  I was less than thrilled earlier in the week when we realized that 7:00am race + we live not in Annapolis = 4:30am wakeup.  Yuk.


The night before the race, in discussion with the poet, I had said that I had no idea what this race was going to look like.  I went to tempo on Friday morning to officially ban myself from racing.  So I told him that my rough plan was to go out easy, and then make a decision at mile 4 about what to do the rest of the race.  My PR was set when I was coming back from surgery last December (thanks, Liz!), and I've unofficially broken it a dozen times since.  So if it looked like I was going to be close to my PR when I hit mile 4, I'd start dropping down to try and get under it, and if not, well, then I get a tee-shirt for running 6 miles.


So my alarm went off in the middle of the night.  I rolled out of bed and directly into my race clothes, brushed my teeth, and threw a whole bunch of granola bars in my purse.  The only great thing about being on the road at 5:00am is that there is no traffic, so instead you just have to be cranky about being awake so early.  We had been warned about traffic being really awful getting into the stadium so we were pretty excited to pull into the stadium with very little delay.  However, getting there so early meant that we had time for granola bars, 2 bathroom stops plus lots of hip flexor stretching and ogling the serious lack of fashion sense that was going on.  The weather was surprisingly perfect - low 70s and cloudy.  I decided it would probably be a good idea to at least jog a few feet to warm up my brain, so I ran around the stadium parking lot a few times and then went right back to re-doing my ponytail and yawning. 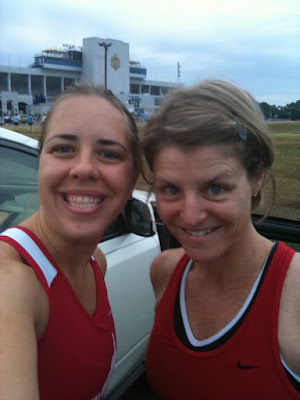 We did not match on purpose.
The starting corral had signs up marking pace, but after standing there for a while it appeared as if most people were lining up 1-2 minutes/mile faster than they could likely run.  We ended up just behind the 8 minute/mile sign.  And after many more snarky comments on the attire of our fellow racers, we started.


15 feet after crossing the starting line a complete idiot moron woman stopped dead because she realized she saw someone she knew on the sideline.  Um?  To all new runners that may be reading this: DON'T DO THAT.  We were close enough to the front of the pack that there wasn't a whole lot of ducking and weaving.  The route took us around the stadium parking lot and out the road.  The first mile went by easily - I felt like I was keeping an easy pace, although I looked down just before the 1-mile marker and saw low 8:30s.  I hit the brakes because I wanted to negative split the run, and starting out with an 8:31 mile is not going to make for a good negative split.  The first two miles were mostly flat or false flat downhill, and I had to continuously zero in on holding back the pace.


The first little hill came just after we hit mile 2.  It was followed by a nice downhill, then two more rolling hills, and I hit the halfway mark averaging in the high 8:30s, which was pretty close to where I wanted to be.  Mile 4 and 5 were flat-out mean.  A steep uphill, a short downhill, and then the long and steep climb as we headed over the bridge (what bridge?  I have no idea).  The 10K-ers turned around at the other side of the bridge while the 13.1 suckers kept going, so we did get it back in downhill, but when we got off the bridge we headed right back up a steep hill towards the stadium.  I wasn't trying to negative split anything at that point, I was just trying to maintain the pace that felt easy in mile 1 (lame).


I had my Garmin only showing lap information throughout so I could keep an eye on my pace but not stress about my finishing time.  After the steep hill at the front of the last mile, I flipped my screen over to overall information and starting doing math.  At first I was surprised to calculate that I was going to PR pretty solidly (how?), but then realized that I had another .2 to run after I hit mile 6.  Kilometers are stupid.  By the time I was done with the math, I realized that it was going to be close.  Sigh.  So I kicked it into gear as the route took us off the road, up the grassy side of a hill, around a tree, and then uphill into the finish.  RUDE.


My sad little kick carried my through and I hit the button on my Garmin to see 53:18 on the screen, which happens to exactly be my official PR.  But when the official results were posted, the race officials were kind enough to add 2 seconds to my time so that I wouldn't be cranky about tying my PR.  Thanks, race officials! 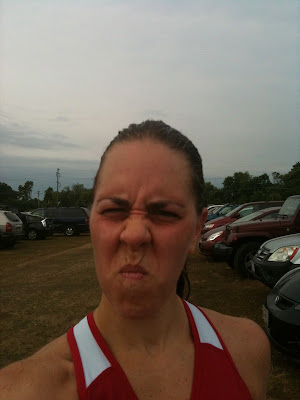 One of the many great things about running the 10K instead of the half was that we finished early enough to get water, pick up our boxed breakfast and walk through the expo before it got really mobbed. 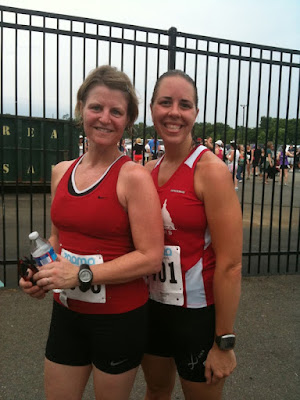 So, it was a pretty good race.  If I had had a better awareness of what the course was like, I probably would have run it a bit smarter and PR'd by a little, but I'm not in racing shape at all right now and didn't feel like I was running at race effort until the very end and I'd actually kind of rather wait until I am in racing shape and then PR by 10 minutes (this will not happen).  We planned the day well so we didn't have to deal with the mad traffic we'd heard about, and we arranged it so that the weather would cooperate (you're welcome).  My overpriced teeny tiny spandex shorts chafed the shit out of my inner thighs for about the 10th time over the past 2 weeks, so I'm going to be hunting for new running shorts.  I don't like non-spandex shorts because my big thighs yank the material up into my crotch and I chafe, which is why I bought the overpriced teeny tiny shorts in the first place.  This is a big reason why I prefer winter running.  Less flopping around skin!