the best is yet to come

I got my first shot of the COVID vaccine last week (what a weird and wonderful world we live in).

Every state is handling it with a different level of chaos, but my "turn" rolled up in the distribution matrix and after a few days of refreshing five different pharmacy websites, I managed to snag a spot up in Loveland on Friday morning. When I got there, the line was long, there was only one pharmacist and everyone was pisserpants about the wait. I was stressing about making it back home in time for a Zoom interview, and started doing my nervous-extrovert thing which is talking to anyone who will listen, at speed. Pretty soon I had made friends with everyone in line. Someone's son is studying entrepreneurship at the University of Chicago, someone's aunt sells leggings on Facebook (sigh). I bored the poor guy behind me with what's going on in my life (spoiler: holy shit LOTS!) and just like that, I was up. The pharmacist was frazzled and I could tell that I was definitely going to irritate her with my joyful blurting-out-random-nonsense that I do especially when I'm jazzed, which came into reality as soon as she asked me, where would you like the shot? I looked at her blankly for a second then told her, anywhere you want, I will literally strip naked in this King Soopers right now if it means I get a vaccine today.

Science, man. It's the best (she meant, which arm). 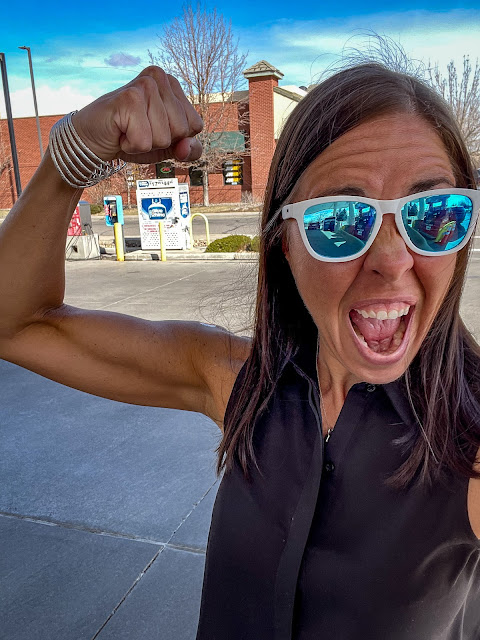 I chattered excitedly while the nurse shot me (I'm smiling behind my mask, she said), waited my fifteen minutes, and once none of my eyeballs had fallen out and I hadn't exploded into microchip dust, I was allowed to go. I drove to the gas station at the other end of the parking lot and took a million selfies with my sparkle band-aid while waiting for my tank to fill, flexing and showing all my teeth (close your mouth)(and maybe comb your hair) like some goofy kid. It was one of those hard, bright spring mornings, when the air in Colorado feels like you could bite into it, snap your teeth cleanly through the crispness, the quintessential bluebird day. The buoyancy I experienced after getting vaccinated reminded me of the morning I watched our vice president get sworn in, how I blubbered giddy, elated tears, knowing that while there is still so much that needs repair in our world, change is happening everywhere, the future is slamming straight into right now. I worked my hair into a messy ponytail with one hand while driving home, wound the windows all the way down despite the fact that it couldn't have been more than thirty-five degrees, and cranked Sheppard's The Best Is Yet To Come up as loud as it would go, smiling and laughing and tearing up with relief, like some kind of nutter only recently escaped from the proverbial nuthatch. That wonderful, unfamiliar, beaming starlight feeling of lightheartedness is still with me. It's hope. I feel a little bit hopeful again, after so much incredible fractured darkness.

I wrote a crap paper last spring about regret. There's this cool thing that happens in the dork kingdom of academia: if you write a crap paper about some topic, people will bomb you for the rest of eternity any time (every time) they see something on the internet even a teensy bit related to one word you said a few times. So, even though this paper is still in the garbage first draft state, I regularly get emails and texts when one of my nerd friends (love you, mean it) sees the word regret anywhere: papers, TED talks, screenshots, papers, coffee mugs, bumper stickers, misspelled tattoos, all of it. A few weeks ago, I woke up to one of these phone explosions. There are six billion years (I counted) of social psychology that let us know that we regret our actions more in the short term and inaction more over the long term. It has to do with how we develop and utilize coping mechanisms in response to our own behaviors and it's not really interesting except to me and maybe three other people who are trying to sort out their dissertations, too. But it means that journalists are forever interviewing older folks and publishing articles with titles like In Very Startling News People Wish They Had Worked Less. We know this. We know that, at the end of it all, people regret three things: not chasing a dream, not sharing and experiencing real love, and not offering forgiveness. Inactions, p = 0.0000 (statistics joke, at least I didn't bring up Schrödinger's cat). This paper was about staggering twists of fate, focusing on people who had burned their lives to the ground and launched in a completely new direction. Of course, the author who had obviously not even googled the word regret was completely surprised to find that not a single person regretted setting fire to everything in order to chase a wisp of a dream. Masahide, barn's burnt down, now we can see the moon. When asked specifically about regrets, though, nearly everyone interviewed said some version of the same thing. I wish I hadn't spent so much time scared, dreaming and dithering and frozen with fear, before torching everything I knew. I wish I hadn't wasted all those moments. I wish I had just leapt. 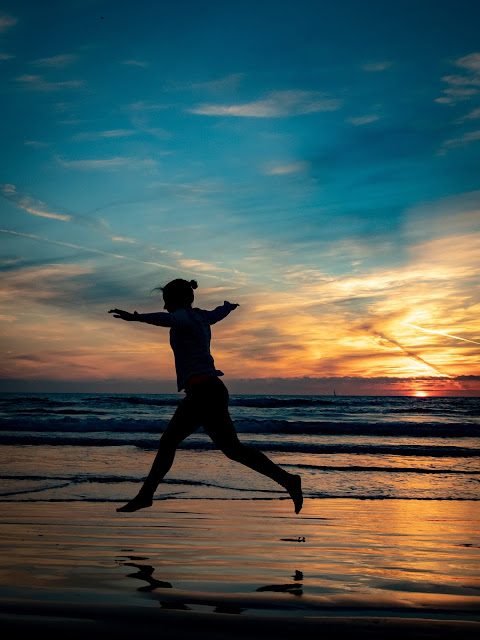 I've been stuck. I can see that; everyone can see that. Being stuck is paralysis. It's circling in the air, 15,000 feet high, whining that I don't really like it here, but doing anything about it sounds scary and hard and different and I don't want to do that either, so instead I'll see how long it takes for the world to change around me instead of lifting a finger to change how I am moving through it. I've spent a lot of time and energy trying to figure out why I'm stuck and, more importantly, how I can get unstuck, how I can unhook myself from all of my sullen anger and incredulous shock at the cards I've recently been dealt. I've been struggling with unsticking. It feels like it would be absolving myself from the dumb shit I've done, and I'm not inclined to offer absolution to myself (or to anyone else; yeah, I'm working on that, too). Because exoneration feels like saying that everything that has happened is okay, and it's not. I'm not sure it ever will be, and this, ladies and gents, this is the national anthem of stuck.

It's always been hard to accept that I have absolutely no control over what fate slings my way. None of us do (hopefully this is not news to either of you still slogging through my adverb piles). But, man alive and sheesh, some of us react to it a hell of a lot better than others, and our reactions are one hundred percent within our control. How we react - good, bad, or downright despicable - becomes the story someone else is going to tell for the rest of their life, how we react is someone else's uncontrollable twist of fate. And regrets terrorize us forever. Steve Jobs, remembering that you are going to die is the best way I know to avoid the trap of thinking you have something to lose. You are already naked. There is no reason not to follow your heart. I know that I'll regret staying stuck, if I don't dislodge myself into forward motion. 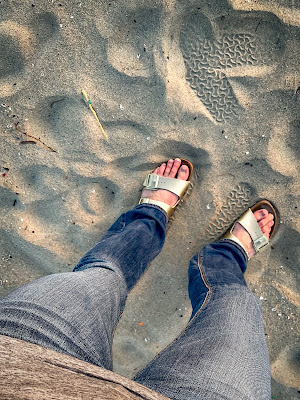 Hope feels like a lifeline out of all of it. Dreaming is cheap. But hope is powerful. It's how I felt after getting the vaccine, while watching Kamala Harris be sworn into the vice presidency, why I'm launching a foundation, because I want women someday to stand on the sacrifices that I am willing to make. Hope is energizing, hope is still smiling 74 miles into 80, maybe it's the coke you pounded an hour ago or maybe it's just the intoxicating freedom of the ride. Hope is believing that it's possible my most thrilling days are still ahead, hope is choosing to view an unwelcome new beginning as a blessing, not a curse. That's the attitude I always want to embody, whether I'm forty or sixty-two or ninety-six, that the best is yet to come. Life has endless opportunities to serve up a fat pitch, some dazzling surprise, and I believe there's no such thing as too old, that it's never too late to grab onto that bombshell and hang on for dear life. Because it is your only, one, wild and precious life. I talked about it in the fall, the most powerful thing someone can do is to show up, and that's because of hope. Make the phone call. Get on the plane, and bring cookies. Ride up the mountain, write the letters, drive all night. Let your legacy be one of love, let the path you blaze be always remembered by the people changed because of your tenderness. Take the selfies, eat the square donuts. Buy the bikini even if you're forty, there's no age limit on a belly button, go out and amaze the world with your light. Because if centuries of dusty old social psychologists are correct, not doing so is what's going to haunt you, all the way to your grave. 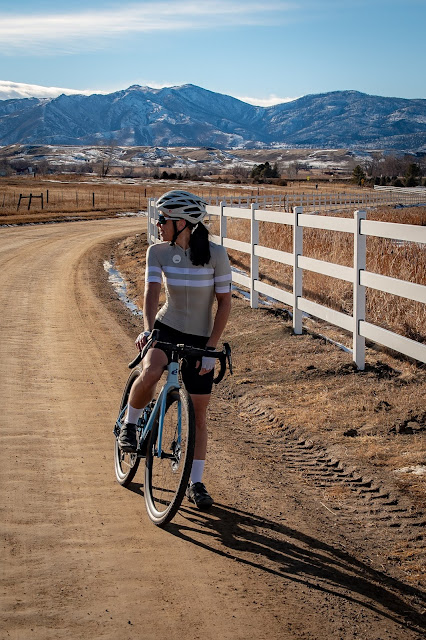 I've been uncertain about showing up here, for myself, about sharing anything that I've been going through, and there are still a lot things I am hesitant to reveal. Whenever someone wants to spectate an ironman, I tell them to watch the swim exit and then nothing else until the last 90 seconds of the run. Because the rest is a grueling mess of adversity. They take pictures of mountain climbers when they are done climbing the mountain, right, not along the way, because who wants to remember the rest of it? The cruelty of the struggle, the honest bitterness of suffering, people don't want to believe it exists, they just want to remember the triumph of the finish line, the view from the motherfucking top. But that's not real. What's real is the noise, what's real is being brave enough to survive. What's real is being alive.

I didn't have any symptoms after the vaccine, other than I rolled over in the night and it woke me up because that sparkle band-aid hurt like a bitch. I told my mom the next day, it feels like I actually got shot. Hope stayed with me, though. Maybe I'll forever be a hopeless romantic trying to jam the world through a set of smiley pink glasses, maybe the only thing optimism is actually doing is launching me into the trajectory of yet another meteor about to wallop my planet. Maybe hope is a symptom, or maybe it's just riding a high. But I'm going to ride this high as long as it lasts, because hope makes it feel so good to be alive. Hope is what's left after an optimist gets her heart smashed into smithereens, hope is the phoenix we discover bleeding, but miraculously still breathing, in the ashes. Because hope? Prevails.