in the water they can't see you cry

The only place in my life where I ever feel graceful is in the water.

I certainly don't look graceful. I've got the general build of an oompa-loompa: short thick legs with all my extra weight around my midsection. I feel dumpy in a swimsuit, especially a one-piece, I wear earplugs and hide my goggles under my cap and I'll just never be anything even remotely close to Liz Hurley when I'm wandering around on the deck with my arms full of swim toys (#triathlete) waiting for a lane. It's probably why diving in will always be my favorite moment. Gravity stops yanking all my flab down into the planet and instead I'm held, balanced, smooth, strong. Always starting with six dolphin kicks, then surfacing and settling into the rhythm of the stroke, succumbing to what feels like tranquil stillness, centered in a constant fluid motion.

I learned to swim when I was maybe 27 or 28 and nursing my umpteenth running injury. An old friend taught me most of it and we had plenty of hilarious moments all over the pools of Arlington, like when we went out dancing one Saturday night and then I cramped - badly - in the middle of a lane the next morning and some poor dude in a speedo had to swim out and fetch me. When I moved to Colorado, I hesitantly showed up for a master's practice at one of the pools where I swim to this day, and that's where I met a lot of the very special and specific weirdos that are my beloved community here in Boulder. The coach who, when I stayed at the end of practice to ask for some feedback on my stroke, told me, I'm actually not sure how you swim as fast as you do looking the way you do so it's probably best not to mess with it. The next coach who, more patiently, taught me all the drills I needed to actually repair some of that trainwreck. The friend who I spent so many hours swimming alongside that I can recognize the sound of her stroke from the parking lot, the men who filled my Monday Wednesday Friday sunrise mornings with an unending stream of Caddyshack quotes and I'm the entire reason that there's a rule about not saying fuck before 7am, my 1pm bud who brings me eggs from her real chickens, my locker room ladies. I've rolled through all the normal nonsense that swimmers do. A 100K month, more 100x100 parties than I can count, won some races, first out of the water, raced a 10K, even done all four strokes without fins when IM showed up on the board. 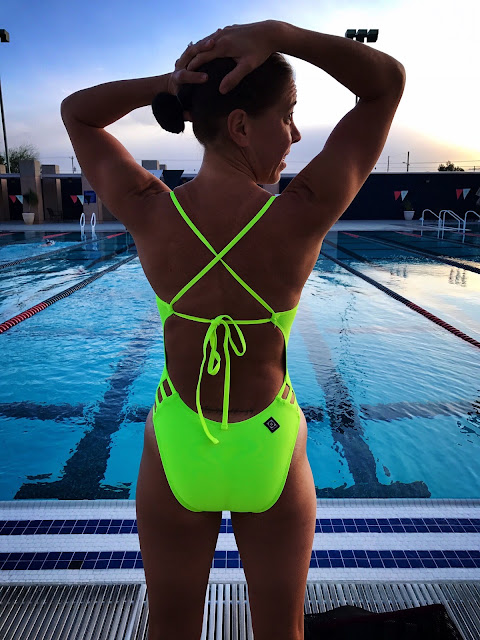 When I was hardcore hunting a sub-60 minute ironman swim, I got in the habit of swimming every day, to the chagrin of every coach I've ever had, and since then, I can only think of two periods of time when I've been out of the water for more than two or three days in a row. The first time was in 2017, when I was waging the war against chronic nerve pain that resulted in a twenty pound weight gain complete shoulder reconstruction. On the day I had surgery, I woke up at 4:30am so I could be in the pool at 5. I squeezed in every lap I could and raced into the hospital at 6:15, hair dripping and uncombed, reeking of chlorine, but settled, square, ready to say farewell to my right arm for the next eight weeks. The second, of course, was during the pandemic. The last time I was in the water before the world closed down was the morning of March 13th, the same day my husband left. I swam about thirty minutes, 1800 meters, and I probably only went to the pool in the first place because we didn't have running water at the Indiana house for three months last year and I used the YMCA as my 'master bath.' I know from my training log that I didn't swim again until May 4th, when the underground swimming community snuck me in through the back door.

Swimming is where I work out all my shit. When I'm furious or grieving or broken, it's where I go to process, to heal. Losing the best coping mechanism I had at a time when everything was falling apart was excruciating. I know it's a first-world problem, I'm rolling my eyes right now, too, but I'm not right with myself when I don't have this place and space. Amanda Beard, in the water they can't see you cry, there's something about the therapeutic privacy of the water that sets my mind free to sort out whatever needs sorting. Sometimes it's the three main points of the discussion and sometimes it's whether or not I should say yes to a marriage proposal, but I can't, I don't want to ever live without it. I know that a couple weeks back I said dreaming is cheap, but if you can bear with my paradoxical hypocrisy for thirty seconds I'll share that the one dream I've had for years is that when I finally buy a teeny tiny house on a huge splat of land, twenty-five miles up the mountain from Bozeman, I'll build a small 25-yard lap pool in the backyard (and then put up a ten-foot fence to keep out my herd of golden retrievers or maybe just build them a pool of their own, since we're dreaming). It'll be my one extravagance, the luxury of being able to swim any day, any time, to fold, flip, and push off the wall, gracefully streamlining into backstroke and opening my eyes up to the black that comes before the dawn, content and secure under the scatter of stars and the silence. (Come on, it's a post about swimming, I get one old bikini shot and my stomach was full of burrito anyway). 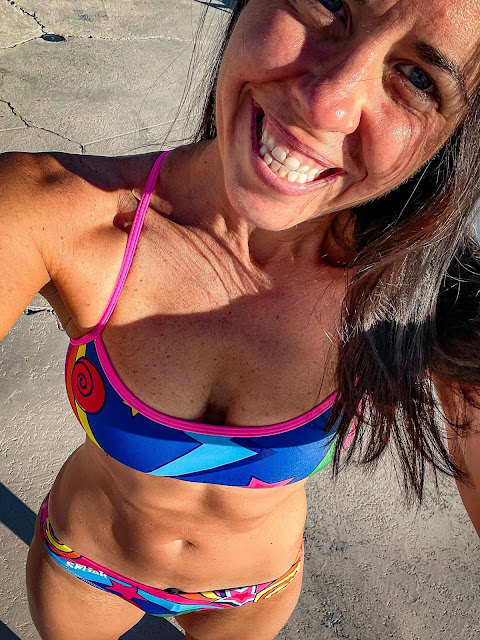 Since the world gave us pools again, I've settled back into the same routine I had for years, Monday Wednesday Friday Sunday and sometimes Tuesday or Thursday or Saturday (ha). My shoulder reconstruction left me at somewhere around 90%. I'm missing the top end, the sharpness, and I chased it for a while but one hard sprint workout would result in me covered with tape and then a few days later needles so eventually it got through my thick head that it doesn't matter if I don't ever again break 60 seconds for a 100. I still do plenty of strength work, my threshold/red mist/CSS/whatever you call it paces have all normalized to where I was pre-surgery, I can make a 1:30 send-off all the live long day which only matters because it means that whenever we get masters back I'll have enough time to spit out, so I've got that going for me, which is nice, before the next top. I can usually squeeze 4K into the swim slot if I hustle and wear all my toys at once, and on at least one of my not-scheduled-swim days I'll flop out the other workout. It's more than enough, and I'm grateful to have it back, especially now, when I need it the most. 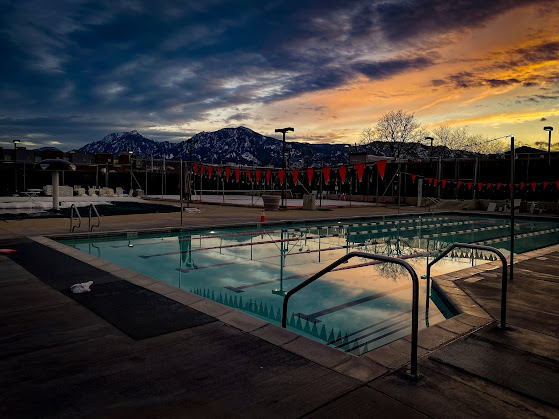 I swam twenty minutes this morning. I needed a place where I felt safe saying, even just to myself, I feel sad, and alone, and that's okay. It is okay. It doesn’t make me crazy and it doesn’t mean I’m a mess. Adam Grant says our emotions are only a first draft and we should notice them and appreciate them but not move mountains for them, not right away. Fifteen strokes, flip, fifteen strokes then flip, the soothing, undulating heartbeat of motion. Not trying to avoid how I feel, or change it, just coexist. Today I feel torn through with grief, the collateral damage of heartache, in the words of some country singer somewhere, this road is too long, too far, and too damn hard, and I'm not going to make it on my own. I remember telling someone, I can't handle one more devastating, crushing loss. I won't survive it. And here I am. Trying to figure out how to survive. Again. It's true that two weeks ago I felt buoyant, and last week I felt grateful for all the light in my life that I'm able to see, for a twerpy highlight reel. This week I feel quiet, wistful, heartsick. But there are many truths that can simultaneously coexist. I can be thankful for the overwhelming flood of text messages love that has rolled in since I started to share my story and at the same time still be grief-stricken over who has gone missing, what I have lost. I can be decisive about how to protect myself, my family, and my future, and also terrified about the earth-shattering changes that I know the next year will bring. I can hang onto my relentless, hopeless optimism, I can open my heart, again and again with forgiveness, but also know when it's finally time to say, enough, and softly slip the door shut.